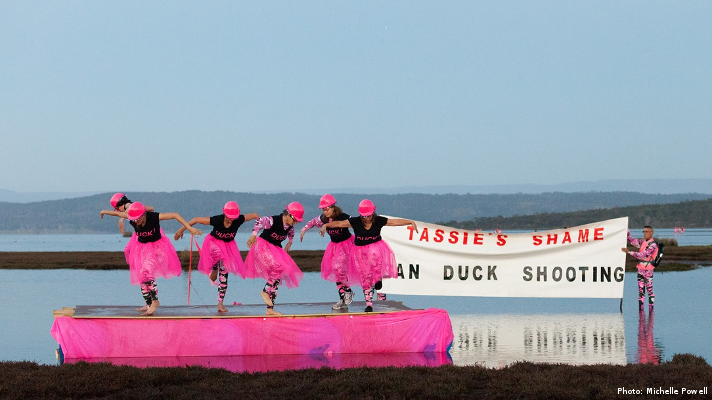 Local artist, Yvette Watt has been charged by Tasmanian Parks and Wildlife Service over the “Duck Lake” performance which was held at Moulting Lagoon on the opening morning of the 2016 Tasmanian duck shooting season.

The colourful dance performance involved 6 dancers in hot pink tutus and hard-hats performing a choreographed routine to music from Tchaikovsky’s Swan Lake as a way of drawing attention to the slaughter of native waterbirds during the duck shooting season. The event drew extremely positive national attention via the media and social networking, and saw the largest number of duck rescuers at the lagoon in many years.

Chris Simcox of Animals Tasmania said:
“I am truly stunned that the department who should be protecting our native wildlife is using their limited resources to pursue legal charges over this peaceful performance. To take up the time of the authorities and Parks and Wildlife staff over such a minor matter is just crazy, especially when they cannot properly police the annual slaughter of native ducks.”

Tasmania remains one of the few states where duck shooting is still allowed, with permanent bans in WA, NSW, QLD and the ACT. The 2017 Tasmanian duck shooting season opens on March 11.

“We will be on the wetlands again this year to do our best to stop ducks being shot.  With estimates that one duck is wounded for every duck killed, there is a huge potential for suffering and painful deaths if we don’t intervene. We call on the Government to ban this violent activity, instead of targeting peaceful protests such as the ‘Duck Lake’ performance.” said Chris Simcox.

The charge relates to non-compliance with the permit issued by Parks and Wildlife after the stage used for the performance was moved onto the water. The case is listed for hearing in April.

Footage and stills are available on request. An 8 minute video summary of the performance can be found here